The right tool for the right job

I spent a large portion of the last week and about 200 bucks installing a utility sink in my brewing area. Man, was it ever worth it. I finished the installation on Thursday night (after roughly 5 trips to area Home Depot stores (including nearly $100 of returns on the last visit)), 2 shutdowns of the water to my entire house, and roughly 24 hours of a drip that would have been totally unmanageable had it not fortuitously been dripping into the sink itself! 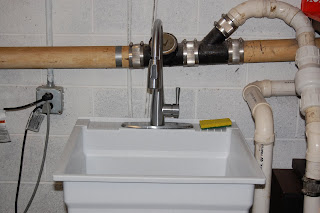 On Friday night, the day after wrapping up the installation, I got a hankering to get that India Black Ale in the keg. It’s been in carboys of various ilk for nigh on a month, and the dry hops have been in there for at least 2 weeks. After staring at everything for a few moments, I decided to at least clean out a keg. How amazing is this? I don’t have to carry the keg upstairs, then go back downstairs and get the drain tube that I always forget, then bring that up, move some dishes around so I have a place to work, then worry about which pieces and parts I end up leaving upstairs and have to get later. I don’t have to worry about making a mess in the kitchen and making sure everything is back in order there. No. Just grab the keg and throw it in the sink. Nothing’s going to hurt the sink, and nothing is going to damage the keg. I don’t have to worry about a bunch of kitchen germs, and best of all, there aren’t any stairs. Even if I forget something 🙂 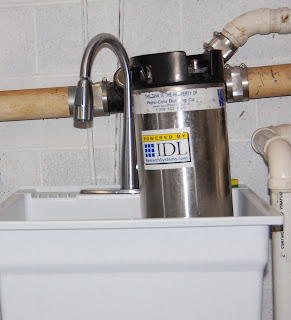 As I sit here enjoying a pint of the aforementioned India Black Ale, I can’t help but think about how much easier the whole process becomes. 2 kegs cleaned, 1 beer kegged, that carboy cleaned, and everything done, ready, and put away in just over an hour. It’s that much easier, and this is just for kegging. I can’t wait for Brew Day!

If you’ve never done any plumbing before, it might be a bit of a stretch, but the reality is that I am pretty happy about the whole situation. It turns out that with these “sharkbite” fittings (closeup below), it really is easy enough that anybody could do it. All you do is cut the pipe to length and slide these connections on there. I was amazed at how easily these allow you do what you need, and they are compatible with copper, pvc, and pex at the very least. 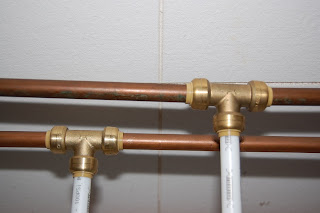 What’s at the brewery?

Fermenters
Triple Threat Chocolate Stout, 1/3 coffee, 1/3 cocount, and 1/3 PB
The Mead That Just Won't Ferment Out Even Though I Pitched It Like 12 Freakin' Times